The use of ozone therapy in the HOCATT™ provides the many benefits iterated in Dr. Mawsouf’s paper and works in concert with the other modalities to facilitate the best all the modalities have to offer for health and vitality. Ozone in the HOCATT™ has the advantage of administration that can be both topical and systemic and its uptake is enhanced by the action of the Carbonic Acid Therapy and Hyperthermia Therapy. Experts say the HOCATT™’s combination provides the greatest, fastest and easiest form of detoxification available!

Ozone is triatomic oxygen, so in order to introduce ozone; we have to start with oxygen. Oxygen is a life-giving, life-sustaining element. We cannot survive more than a few minutes without oxygen. As we know, the body’s cells depend on oxygen. Ninety per cent of body energy is created by oxygen through aerobic metabolism. Proper Cellular Oxygenation is the only way to get the best of health. 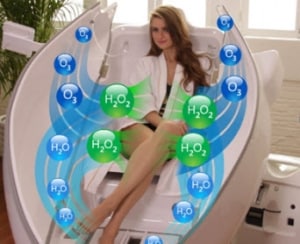 It was postulated that during evolution and the presence of plants and green leaves on earth, the oxygen percent was 50 %. Professor Robert Berner of Yale University has researched oxygen levels in prehistoric times by chemically analyzing air bubbles trapped in fossilized tree amber. He suggests that humans breathed a much more oxygen-rich air 10,000 years ago.

It has decreased in recent times due mainly to the burning of coal in the middle of the last century. Currently, the oxygen content of the Earth’s atmosphere dips to 19% over impacted areas, and it is down to 12 to 17% over the major cities. At these levels it is difficult for people to get sufficient oxygen to maintain bodily health: it takes a proper intake of oxygen to keep body cells and organs, and the entire immune system, functioning at full efficiency.

There are several factors responsible for the continuous decrease of atmospheric oxygen. The most important factors include: deforestation, industrial pollution, car exhaust pollution, devitalized soil (overuse of organophosphates), volcanic eruptions, and deterioration of the Ozone Layer.  Proper Oxygenation of the blood via various modalities can restore health and slow-down the aging process

What is Ozone Therapy?

Benefits of Ozone in Nature

In the upper atmosphere the ozone layer protects earth from the harmful effects of a certain ultraviolet wave length from reaching earth (20-30 kilometers from earth). In the lower atmosphere ozone protects man from pollution by hydrocarbons by reacting with them leading to the formation of non-toxic CO2 & H2O.

What can Ozone Therapy do (generally speaking)?

Approval of use of Ozone in Medicine

How Does Ozone Therapy Work?

When a cell becomes stressed by physical or chemical shock or by viral, bacterial or fungal attack, its energy levels are reduced by the outflow of electrons and it becomes electropositive. Ozone possesses the third atom of oxygen which is electrophilic i.e. ozone has a free radical electrical charge in the third atom of oxygen which seeks to balance itself electrically with other material with a corresponding unbalanced charge. Diseased cells, viruses, harmful bacteria and other pathogens carry such a charge and so attract ozone and its by-products.

When ozone is introduced into the blood, it reacts with these oxidizable substrates killing viruses, bacteria, and fungi. In addition, the metabolic waste products of these organisms are oxidized and an oxygen rich environment is provided which healthy cells can thrive. Normal healthy cells can not react with ozone or its by-products as they possess a balanced electrical charge and strong enzyme system. Ozone targets only diseased cells and pathogens.

Mode of Action of Ozone

Inactivation of bacteria, viruses, fungi and protozoa:
Ozone disrupts the integrity of bacterial cell envelope through oxidation of the phospholipids and lipoproteins. It also damages viral capsid and upsets reproductive cycle by disrupting virus-to-cell contact with peroxidation.

Ozone inhibits tumor metabolism, oxidizes the outer lipid layer of malignant cells and destroys them through cell lysis. Also ozone increases the ability of phagocytes to kill tumor cells (by stimulation of conversion of arginine to citrulline, nitrite and nitrate by phagocytes)

Activation of the immune system

As ozone works on the cellular level, it can be used in many conditions and in different specialties. The conditions that can be treated by ozone can be divided under the following groups: